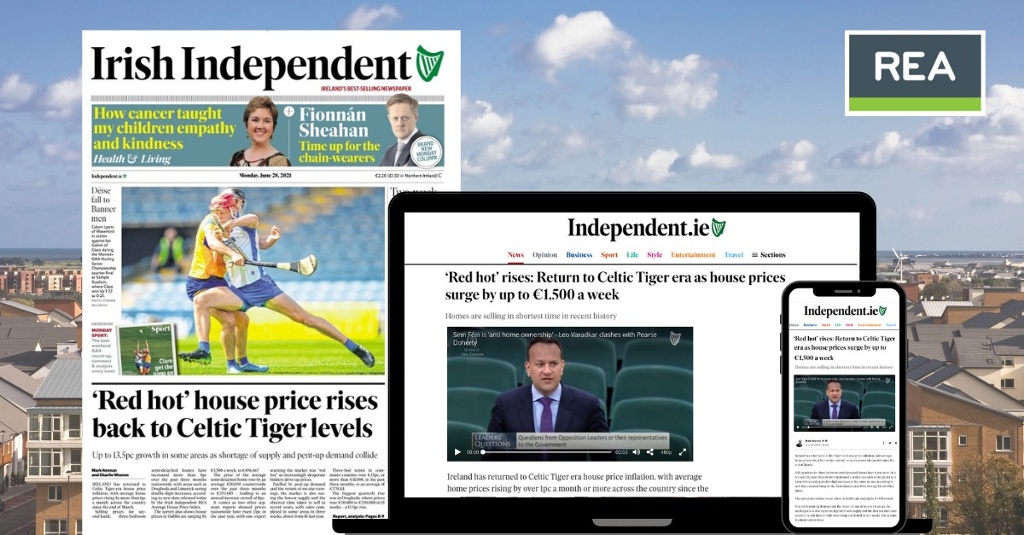 Average house prices in Dublin have risen by €1,500 per week since the end of March, the REA Average House Price Survey has found.

Selling prices have increased by over 4% over the past three months, with areas such as Drogheda and Limerick seeing double digit increases in the same period.

“While the market operated steadily through lockdown, the ability to view homes and the reopening of estate agents has seen a further flood of mortgage-approved buyers emerge,” said REA spokesperson Barry McDonald.

“Many people were not comfortable with the idea of buying houses without the traditional viewing, and they have now joined the ranks of those chasing a limited supply.

“Buyers are motivated and have financial firepower, and our agents are seeing far more multiple bidders forcing prices up.

“Lockdown has caused severe disruption to the new homes sector, forcing many people to concentrate on the scarce stock levels available in the second-hand residential market.

“However, we are starting to see a moderate increase in home coming to market, both second-hand and new, which may improve the situation.”

South County Dublin saw rises of €10,000 in the quarter, with three-bed semis now reaching €430,186 on average, an increase of 2.2%, and time taken to sell halving to just three weeks.

The rise in construction costs and the availability of tradespeople is forcing many people towards moving rather than renovation, according to Winston Halnon of Donnybrook and Dun Laoghaire agents REA Halnon McKenna.

“Lockdown has revealed the true suitability of homes, and many people are in a dilemma as to whether they should extend their existing home or place their property on the market and move to a bigger space.

“What they are finding is that rapidly rising construction material costs and the scarcity of tradespeople is quickly rendering these options uneconomical, with selling increasingly becoming the option.”

While Cork and Galway saw steady rises, the post-lockdown effect was more pronounced in Limerick and Waterford.

In Limerick City, prices rose by €20,000 over the last three months, increasing by 9.3% to €235,000, with a large cohort of first-time buyers continuously bidding on a record low supply, according to REA Dooley.

“We are seeing a mix of investors and owner occupiers selling, as well as a number of people trading up and relocating out to the country from the city,” said Pat Dooley from REA Dooley.

“Because of this, there is a strong demand for country locations, and lack of supply is driving up prices.”

“Supply is currently extremely strict, with only 33 sales of three-bed semis in Galway city this quarter,” said Kevin Burke of REA McGreal Burke.

“Each auctioneer could typically sell that amount of properties in one month.”

Time taken to sell has decreased to three weeks and local agent Darina Collins of REA O’Brien Collins says the market has really taken off since the lifting of Covid restrictions.

“Pent-up demand means prices are rising across the board, and we are currently seeing properties making up to 16% more than at the end of 2020,” said Ms Collins.

“The scarcity of supply plus availability of buyers with savings is having a big impact on second-hand market.

All around the country, buyers are prepared, knowledgeable and ready to move quickly, according to REA.

“Multiple bidders are a factor in most transactions, with agents stressing the importance of ensuring that buyers are committed.

“REA Sothern in Carlow report that they have converted a number of sales to auction when they have a significant amount of bidders, so the process is more transparent for those involved.

“We are also seeing the return of UK buyers in particular areas, with REA Brady in Carrick-On-Shannon seeing enquiries jump from across the water after an absence of two years.

“And where towns like Killarney have benefitted from people moving home from, or out of, Dublin, local first-time buyers are now turning their attention to small suburban villages such as Milltown and Barradubh to find value, according to agents REA Coyne and Culloty.”