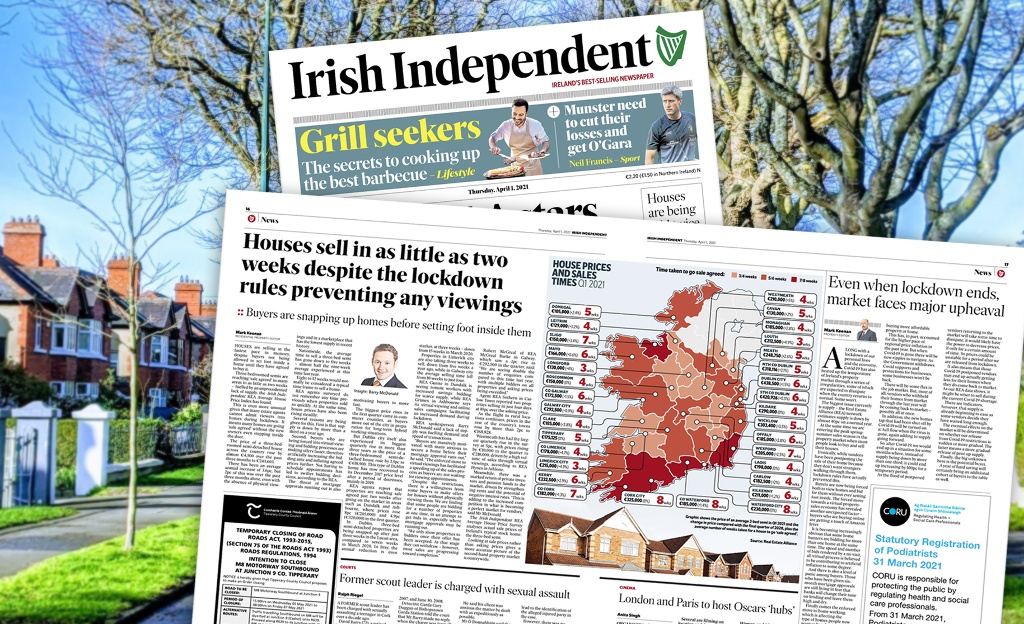 Three-bedroomed semi-detached houses are reaching sale agreed status in a record low of two weeks after coming to market in some areas, new research has found.

Fuelled by an unprecedented lack of supply, the average three-bed semi is now reaching sale agreed after just five weeks on the market across the country — almost half the nine-week average this time last year.

Average house prices rose by almost two per cent over the past three months, despite the absence of physical viewing, in a marketplace which is seeing the lowest supply and the shortest time taken to sell in recent history.

Not having to schedule appointments has led to potential buyers making swift bidding decisions on the back of virtual viewings, speeding up the selling process, according to the Real Estate Alliance (REA) average house price index.

REA agents have reported that properties are reaching sale agreed just two weeks after going on the market in areas such as Dundalk and Ashbourne, where prices have risen by eight per cent (average price €205,000) and 4.9 per cent (€320,000) in the last 12 weeks.

This compares to an average selling time of eight and seven weeks respectively in the Co Louth and Co Meath towns a year ago.

In Dublin, three-bed, semi-detached properties are being snapped up after just three weeks in the Lucan area, compared to seven weeks in March 2020.

In Bray, Wicklow, the annual reduction is even starker, coming down from 15 weeks in March 2020 to just three.

Properties in Limerick city are taking three weeks to sell, down from five a year ago, while Galway city has seen average selling time drop from 10 weeks to four.

Barry McDonald, REA spokesman, said: “Supply is down 38 per cent year-on-year according to myhome.ie and the few properties going on the market are generating immediate interest and attracting offers within a week.

“Buyers are massively motivated, with many anxious to secure a home before their mortgage approval runs out.

“The enforced move to virtual viewings has facilitated a speeding up of the sales process as buyers are not waiting for viewing appointments.

“Despite the restrictions, there is a willingness from some buyers to make offers for houses without physically viewing them.

“We are finding that some people are bidding for a number of properties at one time, in an attempt to get bids in, especially where mortgage approvals may be running out.

“We only show properties to bidders once their offer has been accepted. At that stage they can withdraw, however, most sales are progressing toward completion.”

The price of a three-bedroomed, semi-detached house across the country rose by almost €4,500 over the past three months to €243,603  — representing an annual increase of 3.6 per cent.

The biggest rises in the first quarter came in commuter counties, as buyers move out further from the city in preparation for long-term hybrid working situations.

Dublin city experienced its biggest quarterly rise in more than three years as the price of a three-bedroomed, semi-detached house rose by 1.5 per cent to €438,500 during the past 12 weeks.

This represents an annual increase of 2.7 per cent and means that the average Dublin three-bed semi has now recovered to its December 2017 price level after a period of decreases, mainly in 2019.