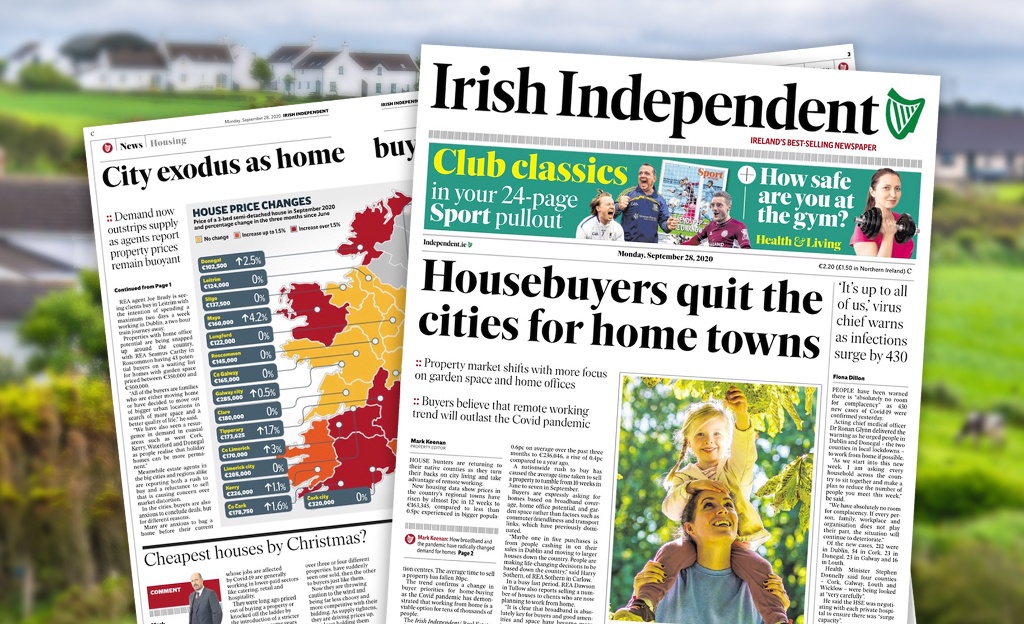 The average three bed semi is now reaching sale agreed after seven weeks across the country – a significant fall from the ten-week average in June.

And what began as a trend three months ago is now a relocation movement as people look to head home to their native places, in the knowledge that remote working is possible from anywhere in the country.

“Houses are taking an average three weeks less to sell across the country, driven by a combination of low supply and highly motivated buyers,” said REA spokesperson Barry McDonald.

“Buyers are more focussed, with a higher percentage of bids being made, and in many cases are looking to secure homes before their current mortgage approval runs out.

“They are competing with a definite shortage of stock nationwide, which is concerning our agents. This supply deficit is keeping prices buoyant and applying upward pressure in some cases.

“It is evident that nationwide, people have really used the lockdown to take stock of their lives, experience remote working and in some cases, relocate in fairly drastic ways.”

Anthony McGee from REA McGee on Dublin’s south city is seeing an abundance of first-time buyers and mortgage-approved buyers and describes a sense of ‘panic buying’.

Agents report that well-located properties close to amenities are high in demand with an emphasis on outdoor space becoming more important than ever.

North County Dublin selling prices rose by a more conservative 0.5%, staying stable in Skerries and Balbriggan but increasing in Swords by an average of €5,000 to €295,000 in the past 12 weeks, driven by a lack of stock.

The lowest rise was felt in Ireland’s secondary cities – Cork, Limerick and Waterford – which experienced a selling price change of 0.15% to an average of €256,250.

Three bed semis remained static in Cork, Limerick and Waterford cities, but Galway saw quarterly inflation of 0.5%, with selling prices rising €1,500 to €285,000, and any properties with home office potential attracting strong interest from those who wish to locate in the west.

“Galway is experiencing a high demand for properties with a home office or Home Office Possibility (HOP) such as a large garage, garden or attic which is suitable for conversion,” said Robert Burke of REA McGreal Burke.

“Properties on the edge of the city have also proved popular as everyone has taken time to assess their current position.”

“The market is better than it was pre-Covid. Maybe one in five purchases are from people cashing in on their sales in Dublin and moving to larger houses down the country. People are making life changing decisions to be based down the country,” said Harry Sothern of REA Sothern in Carlow.

In a busy last period, REA Dawson in Tullow report selling a number of houses to clients who are now planning to work from home from the rural location.

“It is clear that broadband is absolutely key for buyers and good amenities and space have become more important than transport links and commuting time,” said Mr McDonald.

“In Leitrim, property is now selling within five weeks of coming on market with REA agent, Joe Brady seeing clients buy with the intention of spending a maximum two days a week working in Dublin which is a two-hour train journey away.

“Properties with home office potential are being snapped up around the country, with one of our agents in Roscommon REA Seamus Carthy having 43 potential buyers on a waiting list for homes with garden space priced between €350,000 and €500,000.

“All of the buyers are families who are either moving home or have decided to move out of bigger urban locations in search of more space and a better quality of life.

“We have also seen a resurgence in demand in coastal areas such as West Cork, Kerry, Waterford and Donegal as people realise that holiday homes can be more permanent than that.”