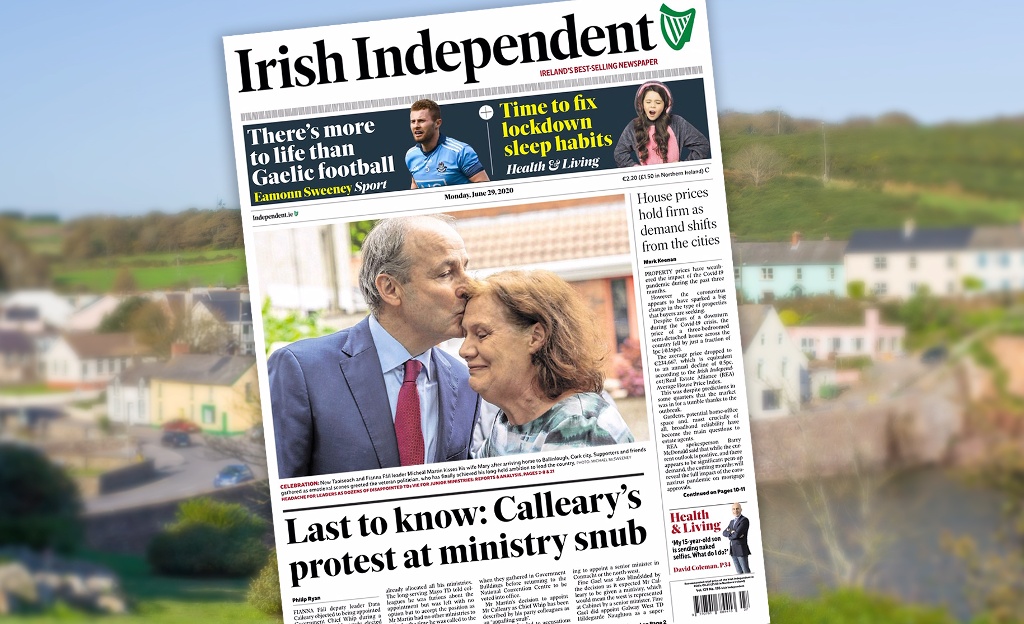 Plans for remote working are fuelling an unexpected surge in demand for house sales in the weeks since estate agents reopened their doors, the Q2 REA Average House Price Index has found.

Changes in the world of work are having an immediate effect on the second-hand housing market with a nationwide trend emerging of buyers looking to move 15 minutes outside of their urban location where they can get more space for the same money.

Gardens, potential home office space and, crucially, broadband reliability have become the top questions to estate agents as REA agents as far afield as Killarney have reported interest in larger properties from Dublin-based viewers who plan on working from home in the future after their experiences in the lockdown.

Despite fears of a downturn in the market during the Covid-19 crisis, the price of a three-bedroomed semi-detached house across the country fell by just -0.15% over the past three months to €234,667, an annual decline of -0.56%.

The price of a three-bedroomed semi-detached house in Dublin City remained stable at €427,167 during the past three months, an annual fall of -1.3%.

“Although sales slowed during the lockdown, they did happen and, despite fears, very few fell through or had to be renegotiated,” said REA spokesperson Barry McDonald.

“The majority of our agents throughout the country have reported a release of pent-up demand since offices reopened.

“We are finding that people are looking for three things – more space, gardens and a guarantee of better broadband, where transport was previously the highest priority.

“Previous surveys had noted an increase in people looking to work from a home for a number of days a week from outer suburban counties, but the experience of working full-time out of the office has changed housing demand into a nationwide search.

“While the current outlook is positive, and there seems to be a lot of pent-up demand, it may be Q3 before we see the effect of Covid-19 on the market and on the outcome of mortgage approvals granted before the lockdown.

“The numbers of enquiries are growing steadily with  people reacting well to the new rules around individual viewings, carried out in a socially distanced manner.

“Time taken to sell, unsurprisingly, increased from nine to ten weeks in Q2, with viewing and marketing processes slowed down.

“This is likely to continue due to restrictions on viewings and will accelerate the need for the industry to adopt time-saving processes such as online data rooms where all documents are visible prior to marketing a property.

“Covid-19 has seen an urban/rural split in the investor market with small builders looking to buy up properties in countries areas for renovation, while some landlords are leaving markets in the bigger cities due to the possibility of falling or frozen rents.

“The Central Bank’s mortgage lending restrictions has been key to maintaining a sense of calmness in what has been a robust market over the past few years.”

The most appreciable drops in the commuter areas were felt in North Wicklow where the number of new homes developments has served to slightly supress second hand values, but elsewhere the market has remained steady.

The highest annual rise (0.84%) came in the country’s major cities outside Dublin – Cork, Galway, Limerick and Waterford, where prices remained static over the past three months at an average of €255,875.

A lack of properties coming on to the Galway market, coupled with a delay in new housing stock have created a demand which should see prices remain strong in the Western city, according to agents REA Halnon McKenna.

Waterford agents REA O’Shea O’Toole report an upswing in vendors placing houses on the market in the expectation of a strong selling price, but aware of a longer time taken to sell.

Prices in the rest of the country’s towns fell marginally (-0.18%) for the second quarter in a row to €161,776 – an annual increase of 0.4%. In the few towns reporting a fall, such as Clonmel and Killarney, agents are citing lack of suitable supply, with good activity at the lower end of the market.

Prices fell slightly (-0.7% €223,500) in Kerry during the lockdown, with Killarney agents REA Coyne and Culloty pointing to a lack of suitable three-bed properties coming on to the market, with quality stock all under offer.

However, in the past three weeks they have also reported a sudden jump in enquiries from people in large cities who feel that they can now work remotely and are seeking higher end properties in one of Ireland’s beauty spots. 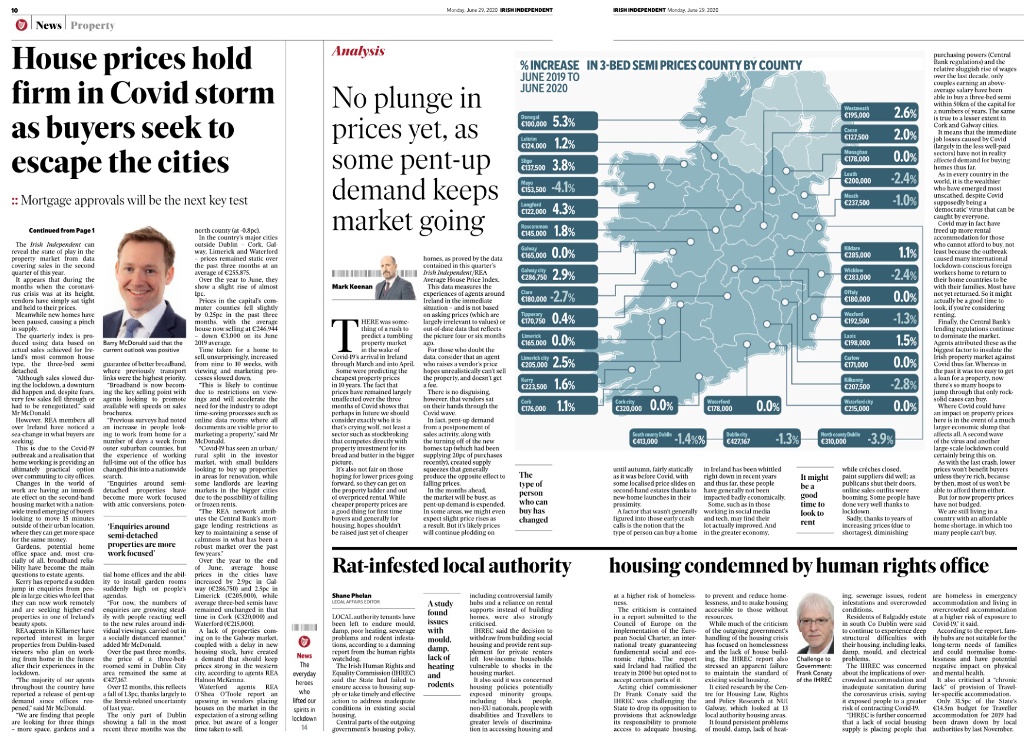 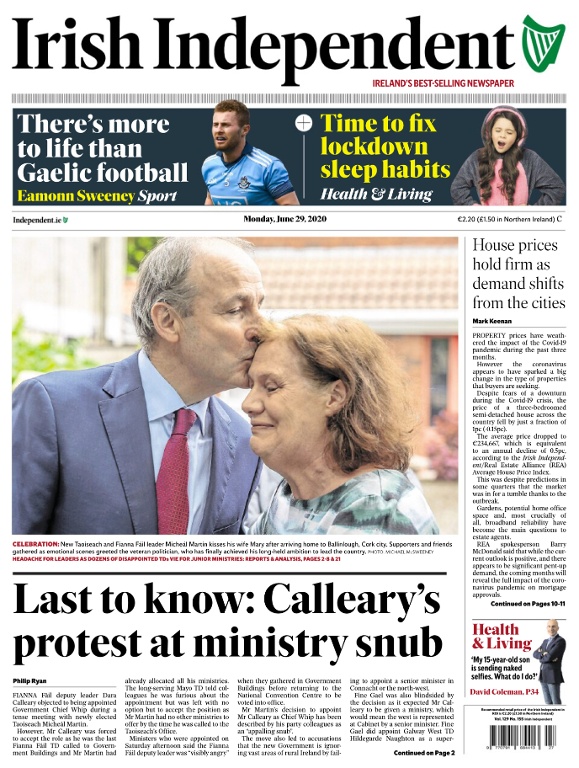