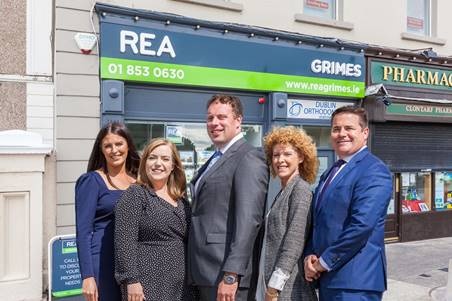 Dublin property experts REA Grimes have taken over the former Savills residential branch in Clontarf.
The office, which will serve the settled northside suburbs of Clontarf, Raheny, Marino, Killester, Sutton and Howth gives REA Grimes a unique view on the north capital and commuter market from Skerries and Ashbourne down to their Dublin Central branch in Pembroke Street.
Savills had announced in May that they were scaling back their residential business in Dublin North with the closure of the Clontarf branch along with two others.
Clontarf resident Jim Gallagher, who has managed the branch for the previous six years, will lead the REA Grimes team at the new office.
As well as residential sales, REA Grimes are deeply involved in new home developments and land sales and, as such, has an overview on the Dublin and East Meath market from the city centre to the outer commuter areas.
“The market is very active in the Dublin Bay North area. Values haven’t gone over the top and prices are certainly steadying,” said REA Grimes Managing Director Paul Grimes.
“There is good stock available in what is a very settled suburban area packed with amenities and easy access to town. Proximity to quality schools is also a huge driver of sales.”
REA Grimes was established in 1971 at a prominent location on Ashbourne’s Main Street before expanding in 1993 with a second office in Skerries.
The company, which now employs 32 people, launched its city centre office in Pembroke Street in 2013, which handles much of its institutional work.
One of the founding companies of the Real Estate Alliance group, REA Grimes works extensively in the new homes market, and advise on all aspects of developmen