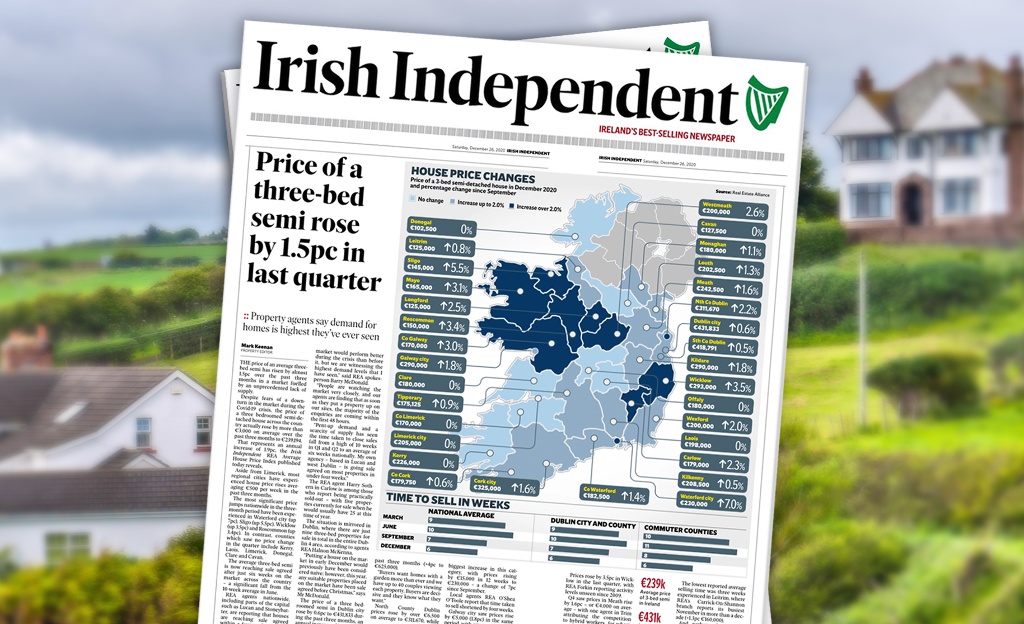 The average three bed semi is now reaching sale agreed after just six weeks on the market across the country – a significant fall from the ten-week average in June.
And many REA agents nationwide, including parts of the capital such as Lucan and Stoneybatter, are reporting that houses are reaching sale agreed within a four-week period as mortgage-approved buyers chase a limited amount of stock.
Despite fears of a downturn in the market during the Covid-19 crisis, the price of a three-bedroomed semi-detached house across the country rose by more than €3,000 over the past three months to €239,194 – an annual increase of 1.9%.
The Irish Independent REA Average House Price Survey concentrates on the actual sale price of Ireland's typical stock home, the three-bed semi, giving an accurate picture of the second-hand property market in towns and cities countrywide.
The biggest rises in Q4 came in Ireland’s secondary cities and the commuter counties – both of whom had experienced the least movement in prices over the preceding 18 months.
"People are watching the market very closely, and our agents are finding that as soon as they put a property up on our sites, the majority of the enquiries are coming within the first 48 hours," said REA spokesperson Barry McDonald.
"It is hard to imagine that the market would perform better during the crisis than before it, but we are witnessing the highest demand levels that I have seen.
"Pent-up demand and a scarcity of supply has seen the time taken to close sales fall from a high of ten weeks in Q1 and Q2 to an average of six weeks nationally - with agencies in many areas such as my own in Lucan and west Dublin going sale agreed on most properties in under four weeks
"The upsurge in demand is nationwide and was illustrated by REA agent Harry Sothern in Carlow, who has reported being practically sold out - with five properties up for sale when he would usually have 25.
"The situation in mirrored in Dublin where there are just nine three-bed properties for sale in total in the Dublin Four area, according to our agents REA Halnon McKenna.
"Putting a house on the market in early December would previously have been considered naïve – however this year, any suitable properties placed on the market have been sale agreed before Christmas."
The price of a three-bedroomed semi-detached house in Dublin City rose by 0.6% to €431,833 during the past three months, an annual increase of 1.41%.
However, with gardens as a main buying driver, interest in capital city areas such as Clontarf (+4% to €625,000) has skyrocketed in the past few months.
“A lot of employees from the big tech companies are moving over to Clontarf area and trading up from apartments in the city,” said Jim Gallagher from REA Grimes in Clontarf, where prices have risen by €25,000 in the past three months (+4% to €625,000)
“Buyers want homes with a garden more than ever and we have up to 40 couples viewing each property. Buyers are decisive and they know what they want.”
North County Dublin prices rose by over €6,500 on average to €311,670 – up 2.2% on the Q3 figure, while South County prices increased by 0.5% to €418,791.
Cork, Limerick, Galway and Waterford cities shared a combined increase of 2.4% in the past 12 weeks with prices rising by €6,000 to an average of €262,500.
“Waterford City showed the biggest increase in this category, with prices rising by €15,000 in 12 weeks to €230,000 – a change of 7% since September,” said Barry McDonald.
“Agents REA O’Shea O’Toole report that time taken to sell shortened by four weeks as people moving out of Dublin compete with first-time buyers for limited properties.
“Galway City saw prices rise by €5,000 (1.8%) in the same period, with any property with Home Office Potential (HOP) continuing to attract attention, according to agents McGreal Burke and properties going sale agreed after four weeks.”
Cork City saw its first price movement in over a year with a 1.6% uplift to €325,000, while Limerick prices remained stable.
Commuter counties are now feeling the benefit of the migration towards space and home working potential, with three bed semis rising 2.2% by almost €6,000 on the Q3 figure to an average of €253,111.
Prices rose by 3.5% in Wicklow in the last quarter, with REA Forkin reporting activity levels unseen since 2009 and time taken to sell dropping from 10 weeks in September to four at present.
Q4 saw prices in Meath rise by 1.6% – or €4,000 on average – with one agent in Trim putting his town’s rising fortunes down to hybrid workers, for whom commuting time is now becoming less of an issue as they work between home and the office.
“The market is being driven by buyers who may be working less than five days a week at home but would have previously bought a smaller house closer to Dublin because of the commute,” said Thomas Potterton of REA TE Potterton in Trim, where prices rose by €5,000 in 12 weeks to €145,000.
Reflecting the flight to rural locations, prices in the rest of the country’s towns rose by 1.2% in 12 weeks to €165,397.
Prices rose by “The lowest reported average selling period in the survey is three weeks in Leitrim, where REA Brady’s Carrick-On-Shannon branch is reporting its busiest November in over a decade (+1.3% €160,000) with domestic buyers to the fore as UK interest is absent due to restrictions,” said Mr McDonald.
“The popularity of Center Parcs saw values in the environs of Ballymahon in Longford increase by 10% this quarter.
“Our agents in Tubbercurry in Sligo reported similar increases, with a €10,000 rise in selling prices since September to €110,000, fuelled by remote workers.
“Roscommon also saw its selling time more than halved in 12 weeks – from 10 weeks to four, with prices in the county up by 3.4% to €150,000, and agent REA Seamus Carthy reporting a large influx of people leaving Dublin to relocate for home working.”
Ends